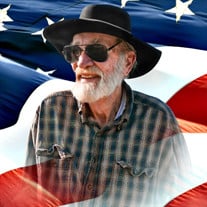 Alfred “Al” Maurice Sims, born December 6, 1926 in Lafayette, Alabama, passed away peacefully on November 12, 2021 at 11:12 pm - ever the lover of numbers. He died surrounded by his family, just 24 days shy of his 95th birthday. Al was the son of the late Alfred Vardaman Sims and Cassie Catherine Cotton Sims and had one sister, Angeline Sims Holmes, who predeceased him in April 2020. Al was raised in Montgomery, Alabama. He enlisted in the Navy in 1944 and served in Southeast Asia in preparation for the invasion. He was proud of his service in tactical communications and on a wooden mine-sweeper. Al often said, “Harry Truman saved my life.” After serving, he attended Auburn University and graduated from the College of Engineering in 1950, completing his degree in three years. While at Auburn, Al met his future wife, Bettye Dean, and they were married in 1950 - a marriage that lasted 46 years until her death in 1996. He is survived by three children: Mike (Elaine Bowers), Michele (Tom Smither), and David (Tracy Salverson). His son Greg died in 1987. He had five grandchildren: Lauren Smither (Joe Barkley), Mary Smither Malear (Grant), Jennifer Smither, Nathan Sims and Ryan Sims, and one great-grandchild, Cameron Malear. He is also survived by his faithful canine companion of 17 years, his beagle, Streak. After 39 years with Georgia Power, retiring as District Superintendent in Hartwell, he enjoyed fishing off his dock, hunting, gardening, reading, gourd artistry, carving walking sticks known by many as “Sims Sticks”, visiting with his friends at Dairy Queen (shout out to Fletcher’s brown on brown country ham biscuit), slaying his grandchildren in cards, building a fire, playing pool, teaching the art of cleaning a fish, tying a knot, growing a tomato or sharing any bit of useful information that could be transferred to the next generation, seamlessly bridging the 1940’s and the 2000’s. He loved being surrounded by his growing family and frequently said how thankful he was that they enjoyed spending time together. While he will be missed dearly, his family is grateful for his influence and will cherish his memory. It was Al’s wishes to be cremated and a memorial service celebrating his life will be held Monday, November 29, 2021 at 2:00 p.m. in the Chapel of the Strickland Funeral Home. A visitation will follow the service. The family is at their respective homes. In lieu of flowers, memorials may be made to the Hart County Botanical Gardens, P.O. Box 44, Hartwell, GA 30643 or the Hartwell First United Methodist Church, 200 E. Howell Street, Hartwell, GA 30643. The Strickland Funeral Home and Cremation Services of Hartwell is in charge of all arrangements.

The family of Mr. Alfred "Al" Sims created this Life Tributes page to make it easy to share your memories.

Send flowers to the Sims family.