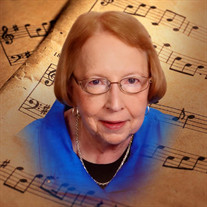 Miss Aurelia Campbell, 87, of Hartwell, passed away Saturday, September 11, 2021 at her home. Born on January 15, 1934 in Hartwell, GA, she was the daughter of the late Charles W. Campbell Sr. and Dorris Ayers Campbell. Miss Campbell was a graduate of the University of Georgia where she received a Bachelor of Fine Arts in Piano Performance. At graduation, she was awarded the Sword of Honor, the highest honor that can be bestowed upon a member of the music fraternity Sigma Alpha Iota. Miss Campbell devoted 65 years as a private piano educator, and throughout her career built a legacy of musicianship, leadership and service in her field. Miss Campbell held the distinction of being the first music teacher in Georgia to be Nationally Certified by Music Teachers National Association (MTNA). She held membership in Georgia Music Teachers Association (GMTA) and MTNA since her days as a university student. In 2004, her colleagues in Georgia and Southern Divisions elected her a "Fellow of MTNA Foundation." She served as state piano chairman for Georgia Music Educators Association and was the organizer of such projects as the performance of a piano concerto by a high school student. When public school had a piano division of the literary events, she had students reach the state level for ten years. She also had several students selected to attend the Governor's Honors Program. She was member of the National Guild of Piano Teachers and had many students earn the National Certificate. She served GMTA through her local association, and held numerous offices in GMTA over the years, including President, Vice-President of Auditions, and Secretary. Miss Campbell was also named to the International Who’s Who of Music. Her students received numerous awards over the years and many received the Outstanding Performer rating at the state level of auditions. Many students also received the rating of Outstanding Theorist when taking the state theory exams. She attended most GMTA Conferences since beginning membership in 1956. Aurelia participated in the MTNA Music Study Award Program which she co-created with Wayne Gibson, MTNA President, the Studio Festival Program and the Music Achievement Award Program annually since their inception. Many of her students continued their piano study on the collegiate and graduate levels. More than 40 of her students had a parent who studied with her as well. One of her colleagues recalls: "She was known for her ability to think through to the end of every idea and proposal, and organization was her middle name. Her leadership and service were beyond comparison. She was, in the truest sense, a real role model for the private piano teacher." One of her former students commented: "Miss Campbell’s influence on my life ran deeper than the music she imprinted on my soul. Her standard of excellence, the discipline she instilled in me, sacrifices and choices I made when it came time to practice or perform, became some of the very characteristics that make up who I am today." As a part of her community, she served on the Regional Arts Council and was a member of the local YMCA. Over several decades, she prepared many programs by student performers for church, civic and social organizations. Many of her former students became music educators, church musicians and performers in Hartwell and beyond. Aurelia Campbell touched countless lives as a piano instructor and is regarded as one of the most influential music educators in the state of Georgia and in the nation. Miss Campbell was an independent piano music teacher for over 64 years. She was a founding member, Past-President and Board Member of the Northview Cemetery Association and a member of the First Baptist Church of Hartwell. She is survived by her brother: Charles W. Campbell Jr. of Hartwell; cousin: Cullen Campbell of Hartwell; and caregivers: Dorothea Singleton, Donna Robinson, Kathy Smith, Jackie Richard, Cierra Jones, and Lorene Jackson, all of Hartwell. Miss Campbell is preceded in death by her parents and her infant sister: Vinnie Elizabeth Campbell. Funeral Services for Miss Aurelia Campbell will be held Thursday, September 16, 2021 at 11:00 a.m. at the First Baptist Church of Hartwell with Dr. Stuart Lang and Rev. Carter Tucker officiating. She will be laid to rest beside her parents in Northview Cemetery. Her body will placed in the church at 10:00 a.m. to lie in state until the funeral hour. She requested all former students sit as honorary pallbearers. The service will be livestreamed or viewed later by going to www.facebook.com/firsthartwell In lieu of flowers, memorials may be made to the Northview Cemetery Association, P.O. Box 671, Hartwell, GA 30643. The Strickland Funeral Home of Hartwell is in charge of all arrangements.

Miss Aurelia Campbell, 87, of Hartwell, passed away Saturday, September 11, 2021 at her home. Born on January 15, 1934 in Hartwell, GA, she was the daughter of the late Charles W. Campbell Sr. and Dorris Ayers Campbell. Miss Campbell was... View Obituary & Service Information

The family of Miss Aurelia Campbell created this Life Tributes page to make it easy to share your memories.

Send flowers to the Campbell family.