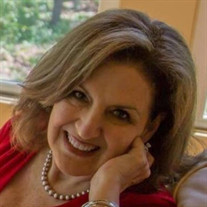 Elizabeth “Beth” Walke Matthews, 67, beloved wife of Robert “Woody” Matthews, passed away Thursday, April 7, 2022 at Emory University Hospital in Atlanta, GA. Born on September 28, 1954 in Aiken, SC, Beth was the daughter of the late Wyndham Patteson Walke, Jr. and Florence Davis Walke. She graduated first in her class in Electrical Engineering from Clemson University in 1974. After graduation, Beth began her career as a process engineer in Parkersburg, WV. In the late 1970’s, she moved to Greenville, SC where she lived until her retirement in 2013. In order to spend more time with her children, Beth started her own computer programming business in the mid 1980s, a pioneering accomplishment of the time. Later in her career, she returned to the corporate world as a director leading human resources teams. Beth enjoyed her early retirement, cherishing time with friends and family. She was always drawn to the water, alternating between her home on Lake Hartwell, the family beach house on Fripp Island, and one of her favorite vacation spots at Hilton Head. Beth loved traveling, particularly to visit family, and had fond memories of her trips to Italy, Japan, Greece, Portugal, France, The Netherlands, the United Kingdom, Barbados, and Singapore, as well as many destinations across the United States and Canada. Some of Beth’s happiest moments were spent socializing with friends and family, playing games, reading books, attending The Masters, watching sunsets, and embracing the roles of “BeBe” to her young granddaughter and Aunt to her many nieces and nephews. Survivors, in addition to her husband Woody, include a daughter, Katherine (Brian) Cumming of North Vancouver, BC, Canada; a son, Taylor (Liz McCurtain) Horton and a granddaughter, Emma Horton of Atlanta, GA; three brothers, Wyn Walke of Johnson City, CO, John (Enu Mainigi) Walke of Washington, DC, and David (Rieko) Walke of Tokyo, Japan; a sister, Susan (Yohn Medina Vivanco) Walke of Colombo, Sri Lanka; eight nieces and nephews; and the father of her children and friend, Bob Horton of Greenville, SC. In addition to her parents, Beth was preceded in death by her stepmother, Sue Ann Walke. As it was Beth’s wish to be cremated, the family will hold a private ceremony and a celebration of life will be held at a later date. In lieu of flowers, the family requests memorial contributions be directed to the American Cancer Society, P.O. Box 2247, Oklahoma City, OK 73123-1718 (cancer.org). The Strickland Funeral Home and Cremation Services of Hartwell is in charge of all arrangements.

The family of Mrs. Beth Walke Matthews created this Life Tributes page to make it easy to share your memories.

Send flowers to the Matthews family.