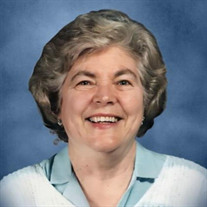 Carolyn Sue Martin West, 89 of Gainesville entered into a peaceful rest on February 15, 2022, until the upcoming soon return of her Lord and Savior Jesus Christ. Born in Forsyth County to her late parents William Edward and Etta Lucindy Corn Martin: It was during her teenage years that Carolyn made the most important decision of her life to invite the Lord into her heart to rule and reign throughout her remaining years. Carolyn graduated from Brenau College with a degree in piano and voice, and along with her father and some of her sisters, known as the “Martin Sisters”, they would go on to perform gospel music throughout the area. After her marriage to Robert Lee West, Carolyn began a livelong devotion and career to teaching children. When her husband was called to preach the gospel, Carolyn served alongside him in various churches throughout Georgia and Florida. She never wavered in giving her musical talents and gifts to the needs of the church. During their 62 year marriage, the Lord blessed them with four children: Robert Lee West, Jr. (Bobby), Susan West Davies, William Michael West (Mike), and Leah West Wright, who all share a strong love for their precious mother. Carolyn is survived by her husband, Robert Lee West, Sr. of Gainesville, son, Bobby (Grace) West of Connecticut, daughter, Susan (Mark) Davies of Flowery Branch, son, Mike (Mardi) West of Cornelia, daughter, Leah (Nelson) Wright of Gainesville, brothers and sisters-in-law; Ellis (Nancy) Martin, Gainesville; Frank (Stacy) Martin, Gainesville; sisters and brothers-in-law, Mary Lou Nix, Clermont, Martha (James) Tanner, Gainesville, sisters-in-law, Winnie Martin, Marietta, Gail Hudgins of Gainesville, Debra West of Dalton. Nine grandchildren, four great grandchildren, and a number of nieces and nephews also survive. She is preceded in death by her brothers and sisters-in-law, Herman (Mary Grace) Martin, Emmett Martin, Kermett (Ann) Martin, sister, Colene Ruby Martin, sister and brother-in-law, Regina (L.C.) McNeal, and brothers-in-law, Benny Nix and Claude West. Funeral services will be held Saturday, February 19, 2022, at 2:00 p.m. in the sanctuary of Brookstone Church, 3681 Cleveland Hwy., Gainesville, GA. Visitation and viewing will be from 11:00 a.m. until 2:00 p.m. in the fellowship hall of the church preceding the service. Interment will follow the service at New Bridge Baptist Church Cemetery in Gainesville, Ga. Flowers for the family can be sent to: 100 Evergreen Trail, Gainesville, GA 30501. In lieu of flowers the family has asked that memorial contributions be made to the outreach mission of your choice to your local church. Strickland Funeral Home of Lavonia is in charge of the arrangements. To sign the online guest register and leave personal condolences to the West family, please visit stricklandfh.com.

Carolyn Sue Martin West, 89 of Gainesville entered into a peaceful rest on February 15, 2022, until the upcoming soon return of her Lord and Savior Jesus Christ. Born in Forsyth County to her late parents William Edward and Etta Lucindy Corn... View Obituary & Service Information

The family of Mrs. Carolyn West created this Life Tributes page to make it easy to share your memories.

Carolyn Sue Martin West, 89 of Gainesville entered into a peaceful...

Send flowers to the West family.