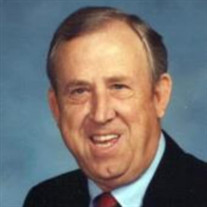 Mr. Henry Marshall Daniel, affectionately known as “Buddy”, age 91 of Elberton, passed away on Wednesday, July 14, 2021, at Piedmont Athens Regional Hospital. Mr. Daniel was born in Elberton on July 29, 1929, son of the late Enos Roscoe “Bud” Daniel and Jessie Minerva Stratton Daniel. He earned an electrical engineering degree from Georgia Institute of Technology and served his country faithfully in the U.S. Army. He worked as an electronic engineer at the Federal Aviation Administration, from which he retired after 42 years of service. Wherever he went throughout life, Buddy held strong to the Christian principles that were instilled in him at Harmony Baptist Church as a youth. He was a former member and deacon of Cleveland Avenue Baptist Church, former member of Liberty Baptist Church, former member of New Hope Baptist Church, and a present member of First Baptist Church of Elberton where he was a member of the Margaret Campbell Sunday School Class. “Deda” enjoyed gardening, collecting antique tools and tractors, traveling the world; but, was always the happiest when surrounded by his grandchildren. His three priorities in life were Jesus, family (especially Manona), and his church. Survivors include his wife, Manona Elizabeth Kelly Daniel of Elberton; three daughters: Joy and Randall Baker of Winston-Salem, NC, Jan Daniel of Fayetteville, and Jill and Holley Toler of Fayetteville; sister, Peggy and Leon Bryant of Elberton; grandchildren: Jessica Baker, Katie and Judge Johnson, Kristen Baker, John and Austin Baker, Whitney and Robby Reece, and Mackenzie and Hunter Luker; great-grandchildren: Marshall, Kellan, Janna, Meridian, and Maddie; and numerous nieces, nephews, and other relatives. In addition to his parents, he is preceded in death by his siblings: Opal and Hubert Adams, Juanita and George Marsh, Everett and Rachel Daniel, Cecil and Betty Daniel, and Charles and Pauline Daniel. Funeral services celebrating his life will be held on Saturday, July 17, at 3:30p.m. at First Baptist Church of Elberton. Interment will follow in Elmhurst Cemetery. The family is at the residence and will receive friends in the Fellowship Hall at First Baptist Church on Saturday from 2:30-3:15p.m. prior to the service. Members of the Margaret Campbell Sunday School Class will serve as honorary escort. Flowers are optional and contributions may be made in his memory to First Baptist Church Ramp Ministry, 132 Heard Street, Elberton, GA 30635. Those wishing may sign the online guestbook at www.berryfh.com. Berry Funeral Home & Crematory of Elberton is respectfully in charge of arrangements for Mr. Henry Marshall “Buddy” Daniel. This announcement courtesy of the Strickland Funeral Home of Hartwell.

The family of Mr. Henry "Buddy" Daniel (Courtesy) created this Life Tributes page to make it easy to share your memories.

Send flowers to the Daniel family.