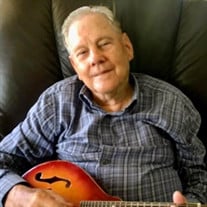 Mr. Columbus Herbert Atkinson, 93, of the Reed Creek Community, Hartwell, passed away Friday, December 24, 2021 at his home. Born on July 5, 1928 in Tampa, FL, he was the son of the late Owen Ayers Atkinson and Janie Norvan Cleveland Atkinson. Mr. Atkinson was a product engineer from Tenneco Automotive. Herbert was a member of Reed Creek Baptist Church where he was a former Deacon, Sunday School teacher, served on various committees, and played and pitched baseball for Reed Creek. He was also a poll worker for the elections, a Boy Scout Leader and a member of the American Legion Post 109. Herbert served in the Army from 1950 to 1952 where he served in the 24th Infantry Division in Korea as a combat medic from 1951 to 1952. He was in the Army Reserves for 14 years, served in the Georgia National Guard for 10 years, and finally retired after 26 years of military service as a Sergeant First Class and known to his National Guardsmen as “Sarge.” Mr. Atkinson was avid gardener and grew muscadines and tomatoes. He raised & trained hunting dogs, and even trained the birds to train the dogs. He also loved fishing on Lake Hartwell and the Gulf of Mexico. Survivors include his wife: Elizabeth Ann Simpson Atkinson; three sons: Charles Atkinson (Teresa) of Comer, GA, Alan Atkinson (Jackie) of Gainesville, GA, and John Atkinson (Angie Acuff) of Hartwell; daughter: Lynda A. Hall of Greensboro, GA; eight grandchildren: Molly, Abby, Brooke, Lisa, Tyler, Laura, Allison, and Madison; and six great grandchildren: Emmalyn, Kailyn, Thomas, Daxton, Riley, and Blakely. Mr. Atkinson was preceded in death by his parents; brother: Alfred “Red” Atkinson; sister: Helen Bailey; son-in-law: Max Hall; and one grandchild: Nathan Atkinson. It was Herbert’s wishes to be cremated and a memorial service celebrating his life will be held at later date to be announced. The family is at their respective homes. In lieu of flowers, memorials may be made to the St. Jude Children’s Research Hospital, 262 Danny Thomas Place, Memphis, TN 38105. The Strickland Funeral Home and Cremation Services of Hartwell is in charge of all arrangements.

Mr. Columbus Herbert Atkinson, 93, of the Reed Creek Community, Hartwell, passed away Friday, December 24, 2021 at his home. Born on July 5, 1928 in Tampa, FL, he was the son of the late Owen Ayers Atkinson and Janie Norvan Cleveland Atkinson.... View Obituary & Service Information

The family of Mr. Herbert Atkinson created this Life Tributes page to make it easy to share your memories.

Send flowers to the Atkinson family.