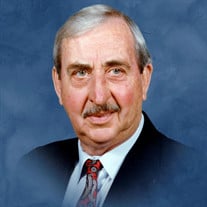 Mr. James Dayton “J.D.” Dyer, 90, of Old Beacon Light Road, Hartwell, passed away Thursday, January 21, 2021 at St. Mary’s Sacred Heart Hospital, Lavonia. Born on November 16, 1930 in Canon GA, he was the son of the late James M. Dyer and Permelia Lowe Dyer. Mr. Dyer was the former co-owner of Hartwell Gulf Service Station, and a former brick mason. He was also a retired construction superintendent for Metric Construction Inc. Mr. Dyer was also a member of the Nancy Hart Masonic Lodge #690, a member of the Yaarab Shrine, and a member of the First Baptist Church of Hartwell where he was a member of the Doc Adams Sunday School class. Survivors include his wife: Patricia “Pat” Cheek Dyer of the home; two sons: Larry Dyer of Hartwell and Brian Dyer (Terri Jane) of Seabrook, TX; three daughters: Pamela Gill (Tommy) of Carnesville, Denise O’Neill (Tim) of Greenville, SC, and Lisa Brooks (Bill) of Watkinsville, GA; one brother: Royce Dyer (Margaret) of Hartwell; five grandchildren: Lesley-Anne Williams (William III) of Longview, TX, Michael Dyer, Nathan Dyer, Dillon O’Neill of Greenville, SC, Graham Brooks of Watkinsville, GA; and two great-grandchildren: Deborah Anne Williamson and George Willis Williams IV of Longview, TX. Mr. Dyer is preceded in death by his parents; one brother: Gene Dyer; and three sisters: Lonnie Bell Isom, Lucille Lovern, and Gussie Mabry. Because of the current conditions concerning the health and well-being of our community, the family will not be having a formal visitation. They ask that everyone keep them in their thoughts and prayers in the coming days and weeks. Graveside services for Mr. J.D. Dyer will be held Sunday, January 24, 2021 at 2:00 p.m. at the Nancy Hart Memorial Park with Rev. Carter Tucker officiating. In lieu of flowers, memorials may be made to the charity of one’s choice. The Strickland Funeral Home of Hartwell is in charge of all arrangements.

The family of Mr. J.D. Dyer created this Life Tributes page to make it easy to share your memories.

Send flowers to the Dyer family.