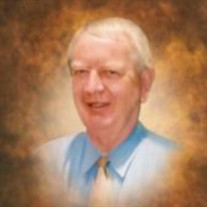 Mr. James William Stovall, better known as “Jim”, a lifelong resident of Elberton, passed away on Wednesday, December 16, 2020, at St. Mary’s Sacred Heart Hospital. He was 80. A son of the late Herbert Frank Stovall and Carrie Marie Burdette Stovall, Jim was a 1958 graduate of Elberton High School, and immediately after graduation, served his country in the U.S. Army. He furthered his education at the University of Georgia where he received a degree in Business Administration and at Louisiana State University where he received a degree in banking. He began working in the operations department at Granite City Bank in 1963. Jim worked his way up to eventually becoming Branch Manager of both branches as well as Vice President and Senior Vice President. In 1997, he went to work at Northeast Georgia Bank where he was Manager of the Elberton Branch. He retired in 2008 as Senior Vice President. Community service was extremely important to Jim. He was a member and past-president of the Elberton Kiawanis Club as well as former president of the Elberton Chamber of Commerce. Jim served on and was past-chairman of the Development of Authority. He was past president of the Elbert County Chapter of the American Cancer Society and was presently serving on the Elbert County Board of Equalization, a position he has held for 11 years. Jim was also a member of the Elberton Country Club. Jim was an active member of Northside Baptist Church. He proudly served as a Sunday school Teacher for many years, a Deacon, and was instrumental in the GROW ministry. Survivors include his daughter, Lorie Stovall-Sears and her husband Norton of Elberton; grandchildren: Calhoun, McKenzie, and Emma; siblings: Emily and Wendell Brown of Hartwell, Gail Burdette of Hartwell, Faye and Steve Hall of Starr, SC, and Byron Stovall of Elberton; and at host of nieces, nephews, and other relatives. In addition to his parents, he is preceded in death by his wife of 33 years, Andrena Parker Johnson Stovall; son, Rodney James Stovall; and sister, Ann Gurley. Funeral services celebrating his life will be held on Saturday, December 19, at 11 o’clock at Northside Baptist Church with the Revs. Dan Fernandez and David McConnell officiating. Interment will follow in Forest Hills Memorial Park. The family is at the residence and will greet friends at the church from 10:00-10:45a.m. on Saturday. Jim will lie in state at Berry Funeral Home on Friday, December 18, from 12:00-5:00p.m. for those wishing to pay their respects and sign the guestbook. Flowers are accepted and contributions may be made in his memory to Northside Baptist Church, 384 North Oliver Street, Elberton, GA 30635. Those wishing may sign the online guestbook at www.berryfh.com. Berry Funeral Home & Crematory of Elberton is respectfully in charge of arrangements for Mr. James William “Jim” Stovall. To send flowers to the family or plant a tree in memory of James William Stovall please visit our Tribute Store. This announcement is courtesy of Strickland Funeral Home of Hartwell.

The family of Mr. James William Stovall (Courtesy) created this Life Tributes page to make it easy to share your memories.

Send flowers to the (Courtesy) family.