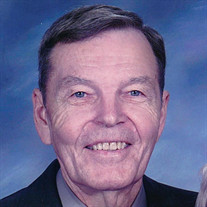 James Royce Kesler, Sr., 89, of Hartwell, passed away on March 21, 2022, at St. Mary’s Sacred Heart Hospital, Lavonia. Born on November 25, 1932, in Winder, Georgia, he was the son of the late James Harold Kesler and Susie Runette Manders Kesler. Jim graduated from Winder High School as an honor graduate. He served in the United States Army during the Korean conflict for two years (1953-1955). He was an employee of American Telephone and Telegraph Company for 35 plus years working in Winder and Villa Rica; and he worked in management positions for American Telephone and Telegraph in Adairsville and Conyers, Georgia until his retirement in 1987. A resident of Hartwell since 1989, he was a member of Hartwell First United Methodist Church, a member of United Methodist Men, and the John Holland Sunday School Class. He was a member of the Telephone Pioneers of America. He was preceded in death by his wife of fifty-four years, Sue Potter Kesler, Hartwell and a son, John David Kesler (1980). Survivors include a son: James R. Kesler, Jr. of Hartwell (Courtney Verdery Kesler); two grandsons: Tyler (Emily) and Stephen Kesler; and two great granddaughters: Olivia and Everly. He is also survived by a sister: Jane Kesler Riley (James) of Riverdale, Georgia, along with many nieces, nephews, great nieces and great nephews. Funeral services for Mr. James Kesler will be Saturday, April 16, 2022, at 5:00 p.m. at Hartwell First United Methodist Church with Dr. R. Allen Stewart officiating. A reception for friends and family will follow the service in the church fellowship hall. Burial will be in Nancy Hart Memorial Park. In lieu of flowers, memorials may be made to Hartwell First United Methodist Church, 200 E. Howell St., Hartwell GA 30643. The Strickland Funeral Home of Hartwell is in charge of all arrangements.

The family of Mr. James R. Kesler Sr. created this Life Tributes page to make it easy to share your memories.

Send flowers to the Kesler family.