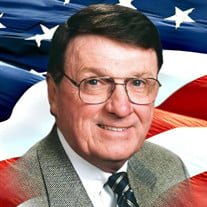 Joseph Patrick Ford, 84, of Hartwell, Georgia, died peacefully on December 5, 2020 after a long battle with melanoma, surrounded by his loving family. Devoted husband and father, devout Catholic, proud U.S. Marine, accomplished businessman, talented basketball coach, revered mentor, and enthusiastic fan of University of Georgia football and UCONN women’s basketball – Joe leaves a legacy of deep passions and loyalties. Joe Ford was born on April 6, 1936 and grew up in Sea Cliff, N.Y. He graduated from Springfield College in Mass. in 1958, and was immediately commissioned as a Second Lieutenant in the U.S. Marine Corps. He served on active duty until 1961, but Semper Fidelis became his way of life. Joe married his sweetheart Carol Ann Gilmore in 1959, and thus began a lifelong romance that would be marked by laughter, music, and some of the most stylish dancing ever seen. After leaving the Marine Corps, Joe and Carol moved to Long Island, N.Y. to start their family of three children, where Joe worked as a physical education teacher and basketball coach for Syosset High School and then Clark High School in Westbury. In 1969 Joe was welcomed to the U.S. Naval Academy in Annapolis, Md., as Assistant Head Coach of the men’s basketball team; in 1971 he was named Head Basketball Coach at St. Anselm College in Manchester, N.H. Joe was recruited to join Herff Jones in 1974, the educational and motivational products company, where he served in sales and management. When Joe retired in 2002, he had managed the east coast from Maine, Vermont, and New Hampshire to Florida and west to Mississippi and Louisiana. He was honored and proud to be one of only two non-sales employees to be elected to the Herff Jones Hall of Fame. Joe and Carol opened their door and their hearts to friends, family, and strangers from around the world as part of the Friendship Force in the 1990s. They became “bonus” parents to Jean Francois Fischer of Switzerland in 1978 – despite the full load of responsibilities as a traveling father and mother of three and successfully maneuvering respective careers. A self-described spoiled brat growing up (his mother called him Beautiful Joe his entire life), Joe credits the strength of his wife Carol Ann, the discipline of the Marine Corps, and his deep Catholic faith for helping him become the man his family and friends revered. Yet it’s impossible to talk about Joe Ford without breaking into a grin. Everyone who knew Joe will cherish his gregarious charm, his boyish handsomeness, his genuine warmth, and his penchant for good-natured mischief. With an Irish twinkle in his eye, Joe would light up any room with a joke, a story, or a song – be it a hotel bar, a friend’s patio, or his own welcoming home. At every celebration he would raise a toast to the evening, always with these words: “Here’s to us, there are no finer people.” He was preceded in his death by his parents, Lewis and Winifred Ford; his brother, Lewis Ford; and sisters, Mary Margaret McAuliffe and Winifred Ford Moore and brother-in-law, Dr. James Moore. He is survived by his loving wife and partner of 61 years, Carol Ann Ford; his son and best friend, Joseph Patrick Ford, Jr. and his wife, Cece, of Auburn, Ga.; and his cherished daughters Kathleen Patricia Winkler and her husband, William, of Venice, Fla.; and Maureen Patricia Cragin and her husband, Charles, of Santa Fe, N.M.; and brother-in-law, John McAuliffe, of East Norwich, N.Y. He is also survived by four grandchildren, Joseph Patrick Ford III, Elizabeth Ashton Ford, Margaret Carol Winkler, and Colette Patrice Winkler as well as many nieces, nephews, step-grandchildren, and step-great grandchildren. A memorial mass celebrating Joe’s life will be held Saturday, December 4, 2021 at 11:00 am at the Sacred Heart of Jesus Catholic Church with Military Honors following. A reception in the Founders Hall will follow the service. A special thanks to his oncologist, Dr. John Doster, the staff at AnMed Health Cancer Center, the staff at Encompass, and Joe’s primary care physician, Dr. Anthony Lau, for their loving and attentive care of Joe and for our family during this difficult period. In lieu of flowers, the family requests that donations be made to Sacred Heart of Jesus Catholic Church Building Fund and the National Multiple Sclerosis Society, Georgia Chapter. The Strickland Funeral Home of Hartwell is in charge of all arrangements.

The family of Mr. Joe Ford created this Life Tributes page to make it easy to share your memories.

Send flowers to the Ford family.