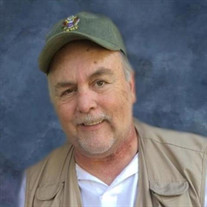 On October 3, 2020, Larry J. Duncan, adoring husband, devoted father, and proud papa, was promoted to glory at the age of 65. Larry was born on November 30, 1954, in Salem, SC to Claude and Cora Duncan. He was the youngest of six children. On April 7th, 1974, Larry married his high school sweetheart and the love of his life, Lynne, and eventually they had two children, a son, Chris, and a daughter, Brittany. Larry enlisted in the Army as soon as he was able. His military career was cut short when he was honorably discharged in 1976, but his heroism and patriotism would never falter. When the dam broke at Toccoa Falls college in 1977, no one had to ask Larry to help, he volunteered, saving as many lives as he could and recovering those he couldn’t. That was the kind of man he was: courageous, brave, strong. Larry was a man of faith, who loved the Lord and felt nearest to Him in nature, making him an avid outdoorsman, going fishing or camping whenever possible. Larry was well known for his quick wit and his generous spirit. Those who worked for him knew him to be tough, but unwaveringly fair. More than anything else, Larry was a family man who knew no greater joy than when his beloved grandson, Connor, was born. All who have known and loved him will forever miss him, but are better for having had him in their lives. Mr. Duncan is preceded in death by his father, Claude and his mother Cora; a sister, Shirley, brother Garwood, and niece Karen. He is survived by his loving wife, Lynne, their son Chris and his wife Jessica and their precious son Connor; and Larry and Lynne’s daughter Brittany and her husband, James. He is also survived by three remaining sisters: Nellie Watson, Doris Kelly, and Edith Kelley, as well as several nieces and nephews. Lastly, he is survived by his treasured dog, Baxter, who provided him with great comfort and companionship in his final years. Due to COVID-19 complicating everything, including grief, there will be no public memorial service at this time. A memorial website has been set up at www.RememberingLarryJDuncan.com. In lieu of flowers, please consider making a donation to a charitable organization for veterans or children. Strickland Funeral Home of Lavonia is in charge of the arrangements.

On October 3, 2020, Larry J. Duncan, adoring husband, devoted father, and proud papa, was promoted to glory at the age of 65. Larry was born on November 30, 1954, in Salem, SC to Claude and Cora Duncan. He was the youngest of six children. On... View Obituary & Service Information

The family of Mr. Larry Duncan created this Life Tributes page to make it easy to share your memories.

Send flowers to the Duncan family.