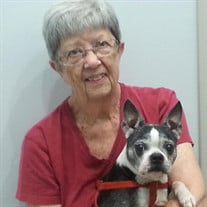 Mrs. Lynn Turner Grissom, 84, of Hartwell, and widow of Furman D. Grissom, passed away Thursday, March 4, 2021 at AnMed Health Medical Center, Anderson, SC. Born in Bristow, OK on October 17, 1936 Lynn graduated from Daniel Webster High School in Tulsa where she met F. Dewayne Grissom. She graduated high school early and got an Associate Degree in Home Economics, later teaching Kindergarten. She and Dewayne married in 1956 at the age of 19. They enjoyed 56 years of marriage until Dewayne’s death in 2012. Along the way they enjoyed success and moved from Tulsa to Ithaca, NY where Dewayne graduated from the hotel management school at Cornell University. Eventually Dewayne started a kitchen design business which grew rapidly, and they moved to the suburbs of Washington DC. At the age of 40, Dewayne sold his stake in the company and moved the family onto a boat in St. Petersburg, Fl. on which they lived for the next 12 years. Lynn began working at Meldisco, becoming a valued manager of their shoe department, and gave the company over 20 years working in the St. Petersburg, Venice, Hollywood, and finally Arlington, TX stores until her retirement in 2000. They then spent the next 5 years roaming the country in an RV, proud that they spent time in every state (except Hawaii) and eventually settled in Hartwell, GA in 2005. Lynn became an active volunteer for Meals on Wheels, Domestic Violence, and the local chapter of AARP. She leaves behind three loving children (Kurt Dewayne Grissom, Karen Rene Kreuter, and Chet Douglas Grissom), 6 grandchildren, and 1 great-grandchild. There will be no services, however donations can be made to the CHARGE Syndrome Foundation at chargesyndrome.org The Strickland Funeral Home and Cremation Services of Hartwell is in charge of all arrangement

The family of Mrs. Lynn Turner Grissom created this Life Tributes page to make it easy to share your memories.

Mrs. Lynn Turner Grissom, 84, of Hartwell, and widow of Furman...

Send flowers to the Grissom family.