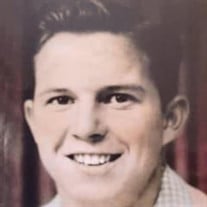 Ned Howell Hart, 80, of Raleigh passed from the presence of his beloved family into the loving arms of his Lord and Savior, Jesus Christ on Thursday evening following a very courageous and inspiring 6-year battle with cancer. Ned was born in Canon, Georgia to his mother Mary and father Belton in 1940 and was the oldest of 11 children. Ned was the first born, followed by seven sisters in a row, followed by three brothers in a row. He is survived by his wife of 59 years, Janice, his daughter Tracey, his son Brad (Olivia), sisters Mary Jo Shiflet, Elaine Cheek, Brenda Foster, Jennifer Anckerich (Larry), Gail Weaver (Danny), Gloria White (Jimmy), Belle David (Wayne), brothers Carey (Karen) and Jerry (Rita), grandchildren Hanah, Abigail, Caroline, Thomas and Liza, numerous nieces and nephews, and grandpups Mumford and Mali. He was preceded in death by his parents, his brother Andy, and nephew Paul. At an early age, Ned developed a strong work ethic and an even stronger dedication to family. At 12 years old, he took jobs such as cutting pulp wood to help bring in money for his family. Two weeks after turning 17, he joined the Army in 1957 and served 3 years in Korea shortly after the Korean War, reaching the rank of Sergeant before returning home to Canon in 1960. In 1961, he met his future wife Janice while bagging groceries for her and her mother at the Colonial Stores grocery in Athens. They married later that year and in 1963 had their daughter Tracey, and in 1969 their son Brad. Ned began that grocery store job at age 20 and turned it into a 52-year career in the grocery business, having climbed the ranks from bagboy to Chief Operating Officer. His resume included 28 years with Colonial Stores/Big Star, 12 years with A&P and 12 years with W. Lee Flowers & Co. Ned had a witty sense of humor and was widely known as a prankster and practical joker. He was also a sports fan and loved playing golf in his spare time. He loved animals (as long as he didn't have to touch them). The backyard animals at their home in Raleigh (squirrels, birds, rabbits and chipmunks) would at times grow noticeably and even vocally impatient if Ned was running late on bringing their daily late-afternoon treat, which consisted of a precisely tailored mix of peanuts in the shell, bird feed, crumbled bread, and on special occasions-- pecans. More than anything, Ned loved doing things for other people and spending time with family and friends. He was a master at the fine art of teasing, aggravating, and loving someone all at the same time. During the course of a normal day, he was naturally referred to as "Ned" or "Mr. Hart." But what he most loved being called was "Daddy" or "Grandaddy" or "Uncle Ned." Ned will be deeply missed by his family and friends, although we all know that he will be with us forever. Ned was also a supporter of St. Jude's Children's Hospital and regularly donated to the organization, as it was his favorite charity. For those that wish to do something to honor his memory and that would make him smile, a donation to St. Jude's is something he would truly appreciate, because he always believed that all children deserve love and happiness. Private services will be held at a later date. This announcement courtesy of the Strickland Funeral Home and Cremation Services of Hartwell.

Ned Howell Hart, 80, of Raleigh passed from the presence of his beloved family into the loving arms of his Lord and Savior, Jesus Christ on Thursday evening following a very courageous and inspiring 6-year battle with cancer. Ned was born in... View Obituary & Service Information

The family of Mr. Ned Hart (Courtesy) created this Life Tributes page to make it easy to share your memories.

Ned Howell Hart, 80, of Raleigh passed from the presence of his...

Send flowers to the Hart family.