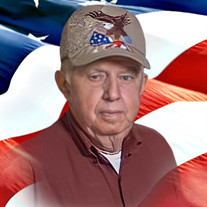 Mr. Noel Herbert Daniel (“Herb” to his pals, “Herbie” to his family), 85, of Crumps Road Hartwell, left his earthly home around noon on Friday, January 15, 2021. He was born on December 4, 1935, in Acworth, Georgia, the 8th of 10 children of John Lafayette Daniel and Callie Bennett Daniel. After attending Acworth High School, he enlisted in the United States Army in 1953 during the Korean War and served until 1956. After returning home from the military, he married his childhood friend-turned-sweetheart, Laura Faye Meador. He was a member of New Hope Baptist Church, where he served as a deacon. After his retirement from Atlantic Steel Company, the couple relocated to Hartwell, Georgia. As long as he was able, he enjoyed riding his bike, watching “The Pickers” and mowing his grass (as well as the lawns of anyone living nearby) whenever it was a half-inch taller than what he deemed “ok”. He enjoyed walking around town and popping into various places for a quick visit with new friends, for a cup of coffee or to brag about his grandchildren. He possessed a positive outlook, undying faith, and quick wit, and left his testimony, smiles and laughter wherever he went. No matter his current situation, his answer to “How are you today?” was most likely always “Better than I deserve to be.” He is survived by his wife, Faye Meador Daniel; a son Gary Daniel (Tammie) of Gray, Tennessee; a daughter Stephanie Daniel Crump (Steve) of Hartwell, Georgia; four grandchildren – Matthew Daniel of Huntsville, Alabama; Alex Daniel (Tracey Powell) of Elizabethton, Tennessee; Lacey Crump Gordon (James) of Carlton, Georgia; Ethan Crump of Athens, Georgia; and two great-granddaughters – Reagan Daniel and Stevie Gordon. Also surviving are a brother Charles Daniel (Sibyl) of Acworth, Georgia, and a sister Merle Emory of Canton, Georgia. Mr. Daniel was preceded in death by his parents and seven siblings. Because of the current conditions concerning the health and well-being of our community, the family will not be having a formal visitation. They ask that everyone keep them in their thoughts and prayers in the coming days and weeks. Graveside services for Mr. Herb Daniel will be Tuesday, January 19, 2021 at 2:00 p.m. at the Rolling Hills Memory Gardens with Rev. Gerald McPherson officiating. Military Honors will follow the graveside service. The family will receive friends following the service. Everyone will be asked to practice social distancing and may want to wear a mask. In lieu of flowers, memorials may be made to the Alzheimer’s Association, National Processing Center, PO Box 96011, Washington DC 20090-6011. The Strickland Funeral Home and Cremation Services of Hartwell is in charge of all arrangements.

The family of Mr. Noel "Herb" Daniel created this Life Tributes page to make it easy to share your memories.

Send flowers to the Daniel family.