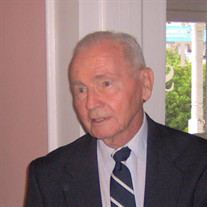 Emil John ‘Pete’ Nagele, age 96, of Lightwood Road Hartwell passed away Thursday August 13, 2020. He was preceded in death by his beloved wife of 64 years, Eleanor Doxsee Nagele, on July 22, 2012. Pete was born in New York City and raised in Long Beach on Long Island, NY through High School. Pete and Eleanor had 3 sons, Robert D., (retired), Richard F. (President, Advantage Marketing Information) and Jeffrey J. (Maritime Attorney - deceased). Pete had three siblings, all deceased, including his sister Eleanor, a Hartwell resident. He cared deeply about his brother’s grandchildren and enjoyed watching them grow into adulthood. Pete started at Oklahoma University and in November 1942 enlisted in the US Army. He was honorably discharged November 1945 with a disability pension as a S/SGT, M Company, 376th Infantry Regiment, 94th Infantry Division. He served in Northern France, the Ardennes and the Rhineland. He received the Bronze Star. Pete earned his AB in Labor Economics in 1949 from Syracuse University (NY) after marrying Eleanor Doxsee on September 12, 1948. He started his career at Bethlehem Steel in Chicago, where he also earned his MBA from the University of Chicago in 1953. After a 40-year career with multiple companies, Pete retired as Senior Vice President, Human Resources for White Consolidated Industries. He was responsible for over 34,000 employees. During his career, Pete served on numerous local and national boards, held an adjunct faculty position at Ashland University, OH and participated in an annual program of lectures at the Industrial College of the Armed Forces in Washington, DC. Both Pete and Eleanor loved the water and wanted a warm climate, which brought them to Hartwell, GA after Pete retired. Following retirement, he joined the faculty at Clemson University as an Adjunct Lecturer and served as Chair of what is now the Lifelong Learning Institute at Anderson University. He was also a founding Board Member of the Hart County Property Owners Association. A memorial service to celebrate his life will be held at a future date. Pete will be buried on Long Island. As a memorial, please consider a donation to Hospice of the Upstate, Anderson, SC; The Hart County Property Owners Association or The Lifelong Learning Institute at Anderson University. The Strickland Funeral Home and Cremation Services of Hartwell is in charge of all arrangements

The family of Mr. "Pete" Nagele created this Life Tributes page to make it easy to share your memories.

Send flowers to the Nagele family.