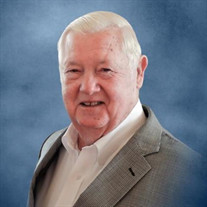 Ralph Mack Owens, age 84, of Lavonia, passed away Tuesday, November 30, 2021 at Greenville Memorial Hospital. He was born September 4, 1937, in Lavonia, a son of the late Clifford and Dora Faye (Cobb) Owens. He was a graduate of Lavonia High School and a veteran of the United States Army. He worked in law enforcement for several years with the Franklin County Sheriff’s Department and the Lavonia Police Department, before retiring from Phil Owens Used Cars. Mr. Owens was elected to the Lavonia City Council in 1987 and after a two-year term, he was elected Mayor of Lavonia. He worked diligently to ensure that Lavonia’s best interests were represented. From the AutoZone Distribution Center to St. Mary’s Sacred Heart Hospital to the I-85 Corridor restaurants, he was instrumental in Lavonia’s industrial and economic growth. During his tenure as an elected official, he served as a board member of the Franklin County Industrial Building Authority, the Franklin/Hart/Stephens Joint Development Authority, and Georgia Mountains Regional Commission, among many others. Mr. Owens was a member of the Lavonia First Baptist Church. He is survived by his wife: Judy Whisenant Owens; son: Mark Owens; daughter: Darlene Owens; step-son: Cliff Taylor; step-daughters: Kim Critchlow, Kelly Green, Chris Higgins, and Alison Shore; twelve grandchildren; and seven great-grandchildren. In addition to his parents, he was preceded in death by wife: Martha Wilson Owens; daughter: Donna Owens Brown; sister: Barbara Burdette; brothers: William “Pete” Owens, Phil Owens, and Wayne Owens; son-in-law: Mike Green; and his beloved dog: Ozzie. The funeral service will be held at 2:00 p.m. Friday, December 3, 2021 at the Lavonia First Baptist Church with Dr. Larry Finger, Rev. Chris Chitwood, and Rev. Courtney Umbehant officiating. Burial will follow in the Lavonia City Burgess Cemetery. The family will receive friends at the funeral home Thursday evening from 6:00 to 8:00 p.m. Mr. Owens will lie in state at the funeral home Friday from 9:00 a.m. until 12:00 p.m. for those that wish to pay their respects. In lieu of flowers, the family respectfully requests that memorial donations be made to the Lavonia First Baptist Church, P. O. Box 47, Lavonia, GA 30553. Strickland Funeral Home of Lavonia is in charge of the arrangements. To sign the online guest register and leave personal condolences to the Owens family, please visit stricklandfh.com.

Ralph Mack Owens, age 84, of Lavonia, passed away Tuesday, November 30, 2021 at Greenville Memorial Hospital. He was born September 4, 1937, in Lavonia, a son of the late Clifford and Dora Faye (Cobb) Owens. He was a graduate of Lavonia High... View Obituary & Service Information

The family of Mr. Ralph M. Owens created this Life Tributes page to make it easy to share your memories.

Send flowers to the Owens family.