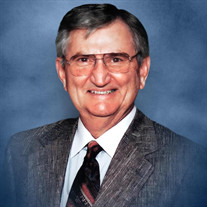 With his health failing, Stewart Vandiver Bowers, Jr., known as Bill, passed away on November 4, 2021 at the age of 93. Born on December 15, 1927 in Hart County, Georgia, Bill was the fourth child and second son born to Dr. Stewart Vandiver Bowers, Sr., and Lilly Hollis Bennett Bowers. Though no one in the family knows why he was called Bill, upon weighing 13 lbs. at birth, it is said that his mother declared Bill was large enough to carry his father's namesake. Bill served as a Navy corpsman at the end of WWII. He attended the University of Georgia on the GI Bill where he also joined the ROTC. After graduation he went into the Army as a First Lieutenant. While he was stationed in California, Bill met his wife of 51 years, Jane Probert Bowers, who served in the Army Medical Corps. Bill and Jane returned to Georgia after leaving the Army, and Bill went to work for the University of Georgia Cooperative Extension Service as the Assistant County Agricultural Agent in Washington County. In 1960 he became the County Extension Director in Walton County where he served until his retirement from the Extension Service in 1984. Bill always said he had the best job in the world, but he also had an impact on the families and youth he served. One story goes that during his work with 4-H youth he saw such potential in one young man that Bill told the boy he would become governor of Georgia one day, and indeed that prediction came to fruition with the election of Georgia’s 82nd Governor. Bill had a subsequent successful career in real estate until his second retirement in 2005. Bill is survived by his daughter, Deborah Bowers McGiffin of Pinehurst, NC, granddaughters Hollis and Carlyn and their father of Waynesboro, Va., Michael McGiffin; his son Stewart Vandiver Bowers, III, and wife Melissa Cauthen Bowers, of Knoxville Tn., and grandsons, Matthew (Ashley) and Andrew (Olivia); his son, Paul Gordon Bowers, and wife Barbara Field Bowers, of Aiken, SC, and grandsons Clay, Ben, and Daniel; his brother Gene Bowers and wife Barbara of Soperton, Ga., his sister Dixie Bowers Lewis of Hartwell Ga.; his sister-in-law, Martha Vassar Bowers of Bowersville; his brother-in-law, Ralph E. Probert of Evansville, In.; the daughters (Pam and Joanna) of second wife, Ruth, and their families; and, 19 nieces and nephews and their families. Bill was predeceased by his parents, his wife, Jane, and his second wife, Ruth Seymour Sellers Bowers and her daughter Libby, his half-brother Harold Bowers and sister-in-law, Olga, his sister Mary Stewart Bowers Gurley Morehead and brothers-in-law, Peter Gurley and Harold Morehead, his sister Bobbie Jo Bowers Mouchet and brother-in-law, Johnny, his brother Jack Rueben Bowers and sister-in-law, Retha, his brother Rev. Connie Mack Bowers, his brother-in-law, Bobby Lewis, his sister-in-law, Evelyn Probert, and his niece, Jennifer Mouchet Marett. The family will receive friends Sunday afternoon from 2:00 to 4:00 p.m. at the Strickland Funeral Home of Hartwell. Other times the family will be at their respective homes. Funeral Services for Mr. Stewart Bowers will be held on Sunday, November 7, 2021 at 4 p.m. in the Chapel of the Strickland Funeral Home with Rev. Todd Ware officiating. Burial will be in the Cross Roads Baptist Church Cemetery. In lieu of flowers please consider a donation to the Georgia 4-H Foundation, the American Heart Association, to the Lottie Moon Offering of the Baptist International Missions Board, or a charity of your choice. The Strickland Funeral Home of Hartwell is in charge of all arrangements.

With his health failing, Stewart Vandiver Bowers, Jr., known as Bill, passed away on November 4, 2021 at the age of 93. Born on December 15, 1927 in Hart County, Georgia, Bill was the fourth child and second son born to Dr. Stewart Vandiver... View Obituary & Service Information

The family of Mr. Stewart "Bill" Bowers created this Life Tributes page to make it easy to share your memories.

Send flowers to the Bowers family.