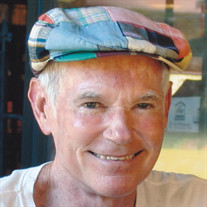 Mr. George Wilson Page, Jr, 79, of Hartwell, passed away November 29, 2021 at his home following a seven-year struggle with cancer. Wilson was born on February 21, 1942 in Anderson, SC. His parents were the late George Wilson Page, Sr. (mayor of Hartwell 1948-50) and Ruth Smith Page (career elementary teacher in Hartwell public schools). He developed a lifelong interest in history at an early age, and this led him to earn a BA in History from Hampden-Sydney College in Virginia and attend graduate school in the Department of History at Emory University. In 1968, Wilson volunteered for the US Army. There, as a Specialist Five with top secret clearance, he worked for Army Intelligence during the Vietnam War and commenced what would become a lifelong study of US military history, foreign policy, and international relations. Since that time, his voracious readings and uncanny ability to remember facts and recount stories from eras past, especially the American revolutionary period, delighted his family and friends. He will surely be remembered as a learned man whose love of history -- and in particular the stories of people throughout the ages who acted courageously and honorably in the face of great danger -- undergirded both his moral compass and his appreciation of what it means to live a good life. In 1975, Wilson began work as an Archivist in the Records Management and Archives office at the University of Georgia, and he stayed with the University for his entire career. Perhaps the most fortuitous development of his work there was his meeting Diane Kinney Roberts, a colleague who ended up sharing a life with Wilson for the next 30 years. Diane preceded Wilson in death in 2016, but he created a shrine to her in his home and kept her memory vibrant until his final breath. The family sends their appreciation to Diane’s family -- the Kinneys -- for their love for Wilson and for all the generosity they showed to Wilson and Diane over the years. Wilson loved athletics. He worked out religiously at the gym, played golf, enjoyed watching football, and was an avid runner. He usually ran one 5K race a week. He embraced the physicality of running and working out, and he savored the comradery of Athens’ running community. He and Diane were particularly active with the Classic City Pilot Club, for which Diane served several years as Race Director. Wilson was especially proud of working with the Club to launch “Diane’s Run” in 2018 to honor Diane's dedication to the organization and to raise funds for brain fitness. Wilson was raised in the Hartwell First Presbyterian Church and continued attending services there most of his life. With his father’s untimely passing when Wilson was in college, Wilson spent almost every Sunday visiting his mother in Hartwell once he settled in Athens, and they attended services together. In his final months, services at the Presbyterian Church became particularly important to him, and he insisted on attending them even as his pain became severe and his ability to walk diminished. He felt a sense of belonging at that church. Another community in which Wilson felt a sense of belonging was what he called the "Breakfast Club.” This was a group of friends that met weekly for breakfast at a local restaurant in Hartwell. When Wilson moved back to Hartwell in 2019 because of his illness, the group welcomed Wilson into their fold. Wilson had grown up with several of the group’s members, and rekindling his friendships with them made all the difference in his final years. The group offered Wilson a band of brothers. He admired the group's participants and cherished every moment he shared with them. The breakfasts and the conversations they inspired were a lifeline, and the family sends thanks to all those who participated. Wilson is survived by Tonnie Austin Page Rushing and Dr. Charles M. Rushing (sister and brother-in-law) and by Carol Page Vickery and George Kendall Vickery (niece and nephew). Family was extremely important to Wilson, but “family” included not only the living but all those who had come before him. He seemed to have encyclopedic knowledge of his ancestors, to the point that he could recount the life stories of countless Pages, Smiths, Wilsons, McCowns, and Kennemers. Wilson believed firmly in the relevance of the past, and this applied especially to the legacy of departed family members. Not that he placed his ancestors on a pedestal -- he most certainly did not -- but he did believe that, for better or worse, our lives are influenced by those that came before us and that, as a consequence, we should strive to learn about those individuals... their personalities, aspirations, achievements, and failures. Ultimately, Wilson lived his life "his way." His many eccentricities -- his slow and deliberate manner of speaking, his above-the-ankle hems, his golf swing's deriving more from Mickey Mantle than Jack Nicklaus, his routine use of "Yes, sir" and "Yes, ma'am," his grinning and scrunching up his eyes whenever he was about to make an important point, which he would then repeat at least three times -- perhaps confused those who didn't know him but certainly charmed those who did know him. He was forever respectful yet, when asked, never shied from offering his candid opinion. He spoke truthfully and carefully. He saw the best in people. He never complained. He valued integrity and inner fortitude above all else. He believed in higher callings. Wilson wished to be cremated and that his ashes be placed in the family plot at Northview Cemetery. In lieu of a service, the family asks that those who knew Wilson paste any stories about him onto Strickland Funeral Home’s online “Tribute Wall” at www.stricklandfh.com. In lieu of flowers, the family asks that memorials be made either to the Hartwell First Presbyterian Church, 41 S. Carter St, Hartwell, GA 30643 or to the Classic City Pilot Club, P.O. Box 5040, Athens, GA 30604. The Strickland Funeral Home and Cremation Services of Hartwell is in charge of all arrangements.

The family of Mr. Wilson Page created this Life Tributes page to make it easy to share your memories.

Send flowers to the Page family.